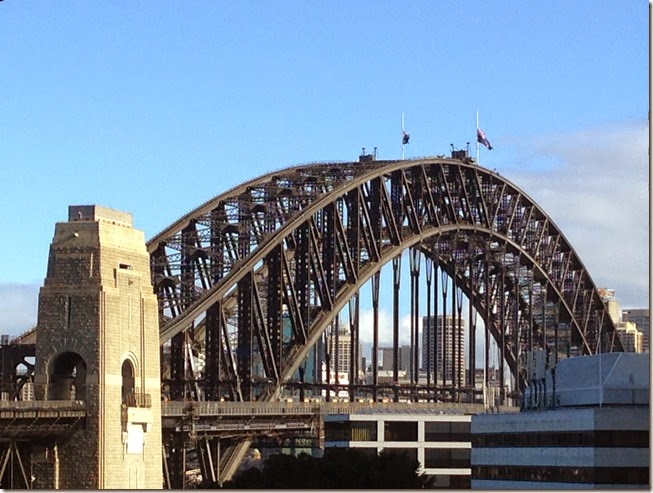 Last night, Margaret and I went to see Aida on Sydney Harbour.  First stop for me was Milson’s Point station, where you always have a close up view of the Harbour Bridge.  The two flags at the top seemed to be flying at half mast, probably for Richie Benaud, who had died that day.

So far the weather, always crucial for an outdoor event, was looking excellent. 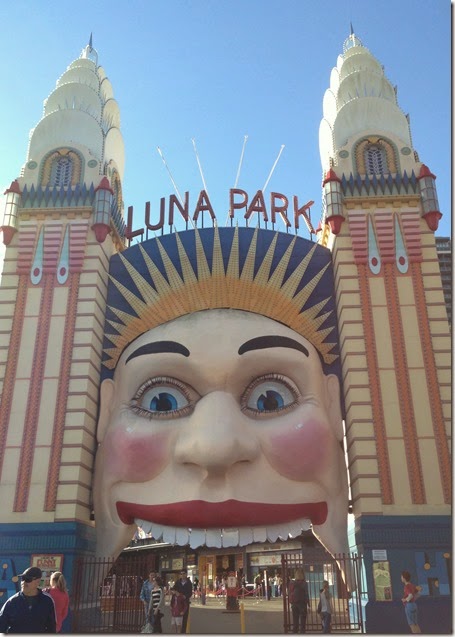 Luna Park was in full swing. 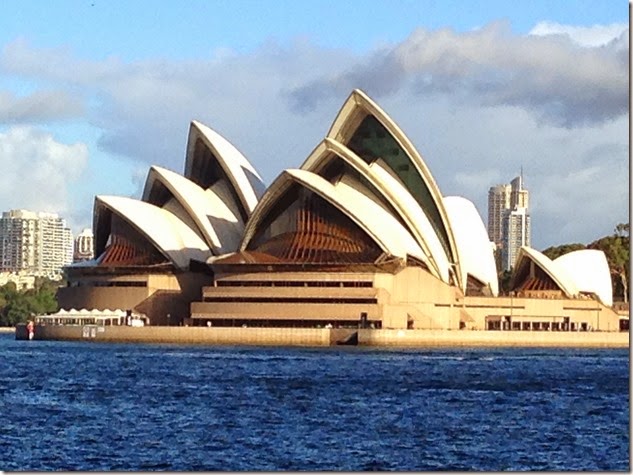 From Milson’s Point there is always a stunning view of the Opera House, here basking in the late afternoon sunshine. 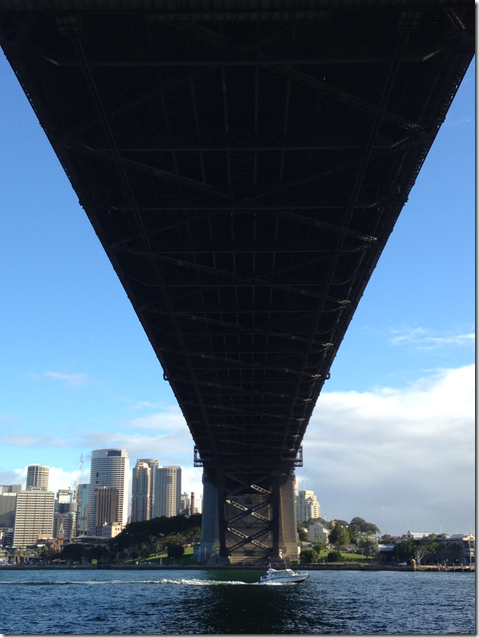 Under the bridge.  There was a small wedding taking place here. 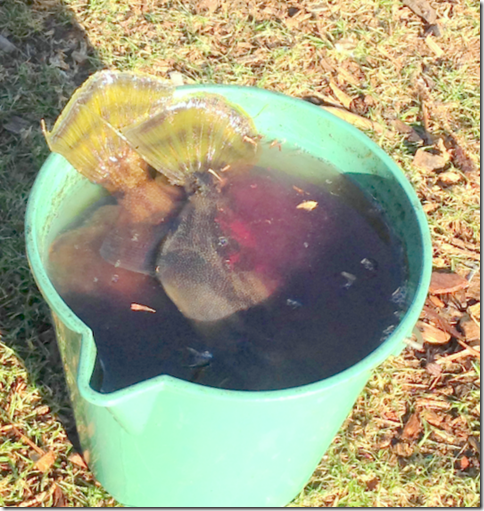 A man was catching fish, right under the Harbour Bridge.  They were leatherjackets, with no scales.  The fisherman told me they were very good to eat, but I couldn’t see much flesh on them. 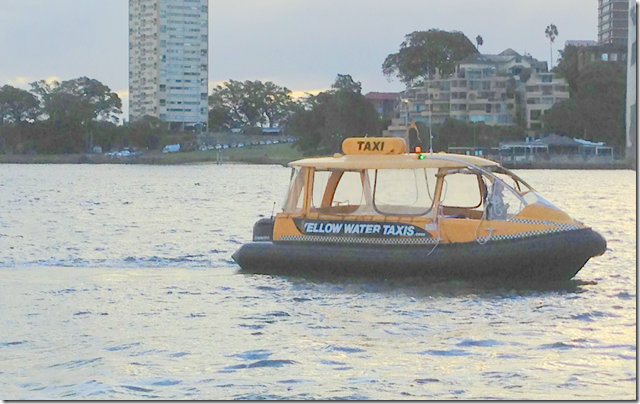 I was planning to go to the opera by water taxi, part of the transport arranged for the event.  I rang the taxi company to check that I was at the right pick up point.  Although it was before the advertised starting time for the opera water taxis, they said they would send one over.  A group of men in suits and another group of men who’d obviously come from a nearby pub and were on their way to the casino, all wanted to share my taxi.  Luckily for me, the taxi driver wouldn’t take any of them, and off I sailed on my own private harbour cruise, leaving all the men behind me. 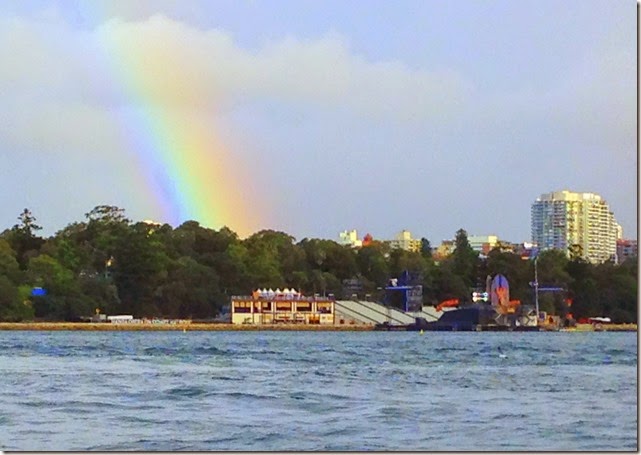 We sailed past the opera venue, as the drop off point was on the other side of the narrow point.  The rainbow gives a hint of what was to come. 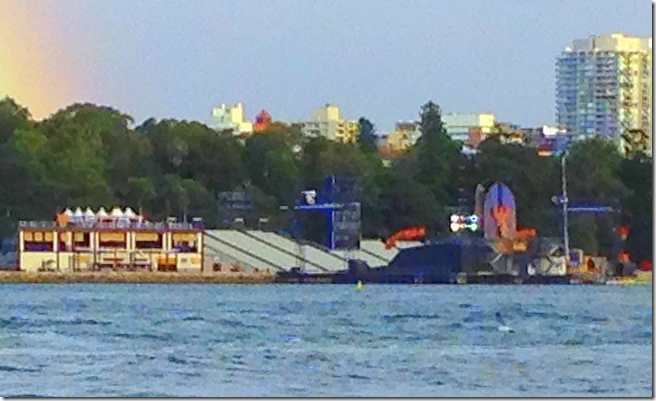 Here is a close up of the opera venue.  On the left are some restaurants, and in the middle is the seating.  We were in the section where you can see a red flag, right up the back, under the overhanging trees, which turned out to be very useful!  The stage is floating on the water, with a large head of Nefertiti facing the seating.  On the side facing the harbour is an image of the Egyptian falcon god Horus – this side was turned to face the audience at one point during the show. 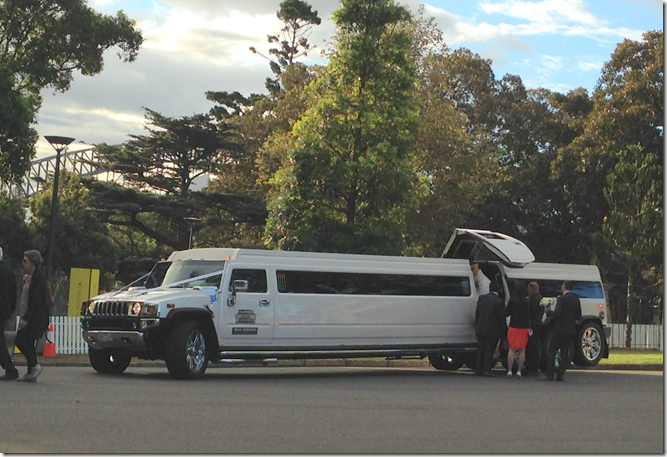 I really enjoyed my private water taxi ride on the harbour – it reminded me of Venice.  The taxi dropped me off about three minutes from the venue.  Walking across, I came across another wedding party climbing into a stretch Hummer. 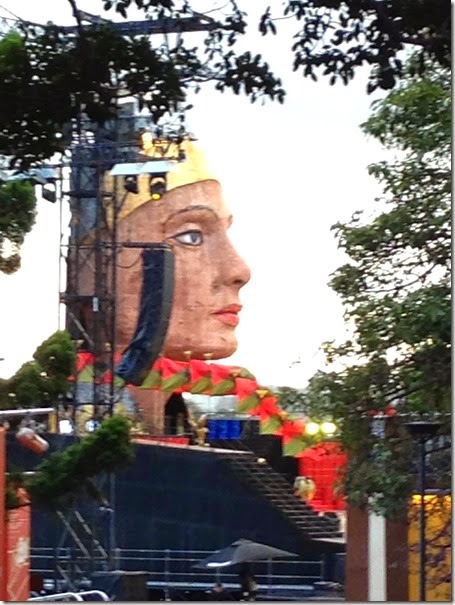 Nefertiti’s 18 metre tall head, in a deliberate state of decay. 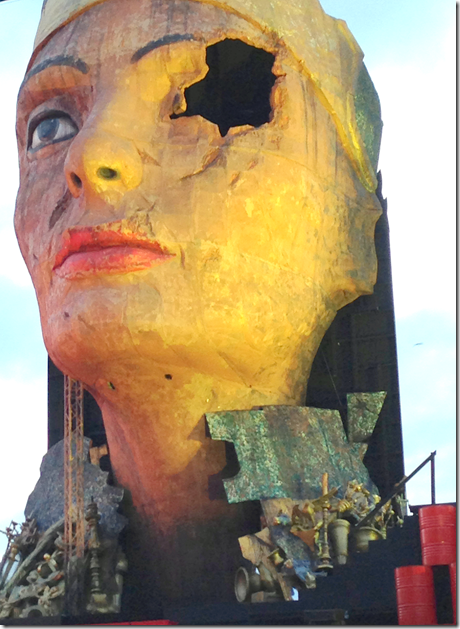 And from the other side.  The setting was an interesting juxtaposition of old and new with men in suits and modern soldiers with rifles alongside ancient Egyptians in chariots, and ancient Egyptian artifacts alongside bright red oil drums.  (The men in suits were also wearing clear plastic ponchos at the beginning when it was raining.) 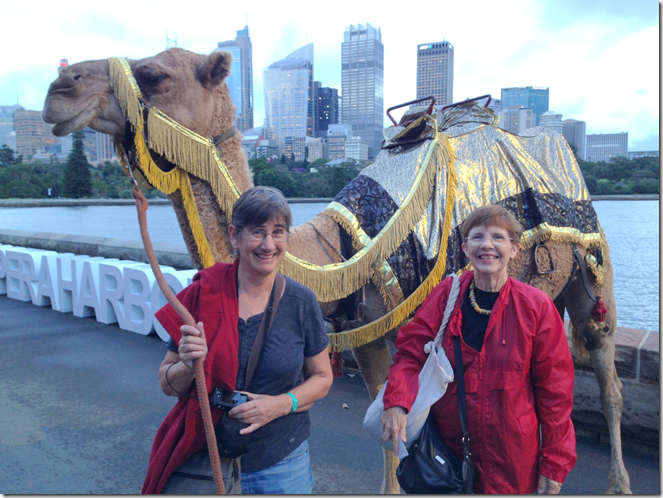 Here we are, with one of the camels. 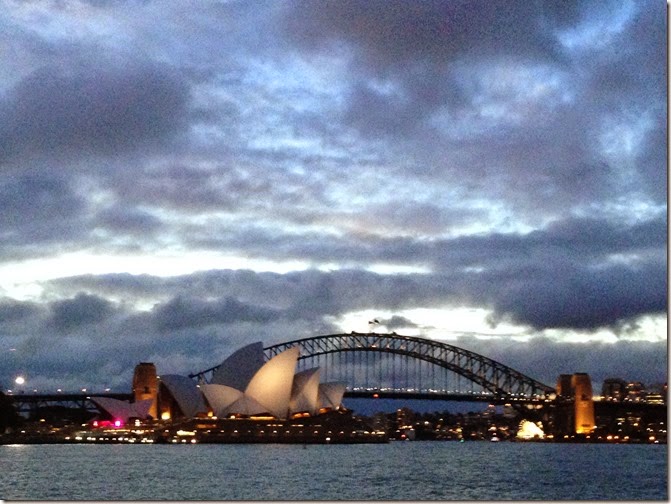 We had dinner overlooking this iconic Sydney view.  And yes, those clouds are getting blacker. 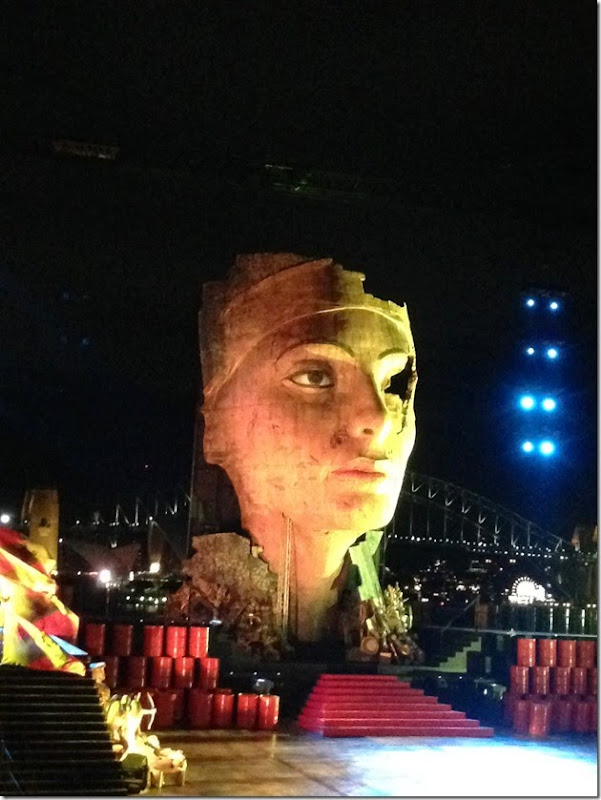 Our view of the stage from our eyrie up amongst the trees.  Note the red oil drums and the Harbour Bridge in the background.

Just before the show started it began to rain, quite hard.  Margaret bravely ventured forth to obtain ponchos for us.  She questioned the policy that people were required to become wet before being offered ponchos, and that they were given out in a non-sheltered spot.  Our overhanging branches were quite helpful in keeping the rain off, but not a lot of use to Margaret, who was already wet. 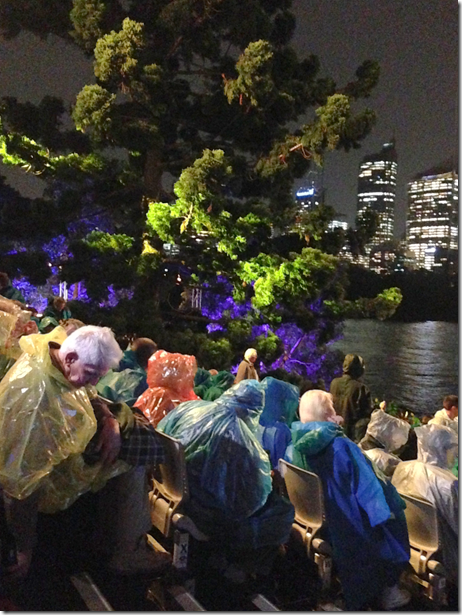 The audience kept their ponchos on for the rest of the night as protection from intermittent showers.  The rain generated a spirit of festival and camaraderie that lasted throughout the performance.  Some resourceful people wore plastic bags on their heads.

I thoroughly enjoyed the lavish show.  The Grand March was particularly spectacular, including four camels and a grand burst of fireworks from the harbour behind the stage.  I found the sound system excellent, despite having read that it was too loud or unbalanced – maybe they’d sorted out any problems by our performance.  I also enjoyed watching the dancers – I think opera benefits greatly with the addition of dance to augment the visual appeal. 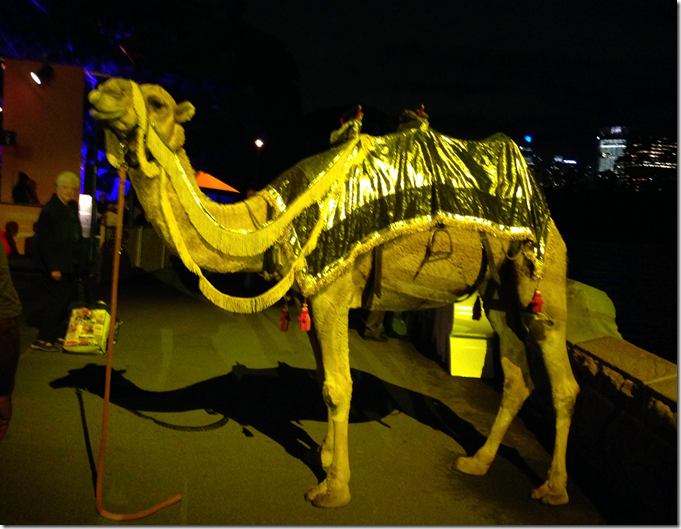 One of the camels, probably the best-behaved one, made an appearance during the interval, maybe to remind us that we were in Egypt.  It was a night to remember.