It’s such a long time since I have written a blog.

Pat and I have been busy looking after his Mum Kit since the three of us moved together to the Viridian retirement village in September 2013.  After a three month illness, Kit passed away on her 95th birthday on 2nd December last year.  Her six grandchildren came from Brisbane, Sydney, Melbourne, San Francisco and Germany, and were all able to see her before she died.  Now we are beginning another chapter of our lives. 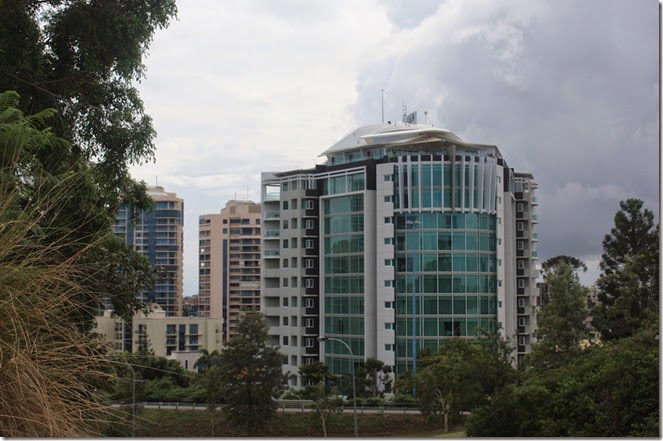 For my birthday (yesterday) Pat brought me to The Point Hotel at Kangaroo Point, just over the Story Bridge onto the south side of Brisbane – a surprise!  We drove into a storm and as we crossed the bridge the rain was so heavy that visibility was reduced to practically zero.  Sadly, during the storm, a kayaker exploring Brisbane’s underground drain systems was drowned. 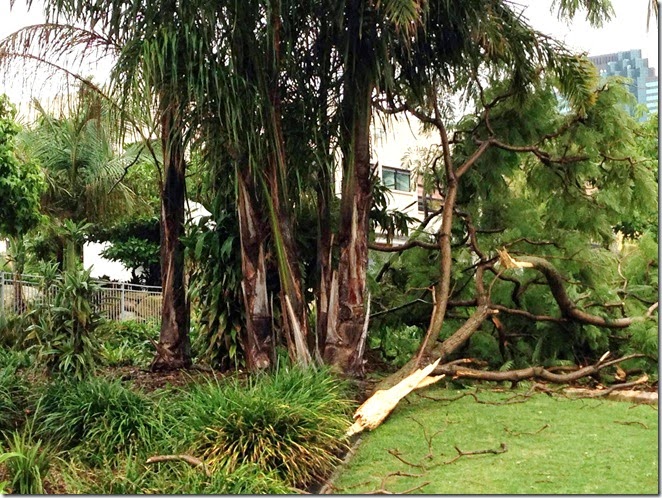 Also during the storm, a few trees in the area lost branches. 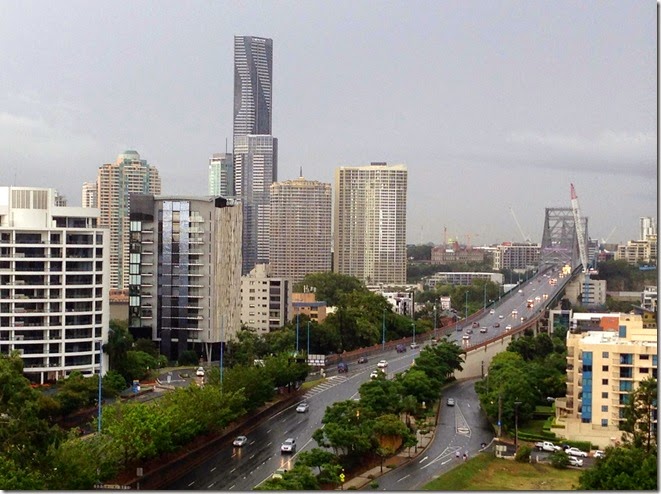 Once safely (and drily) installed, we collected our complimentary cheese plate and bottle of champagne, and settled down to enjoy the view, looking north towards the city and the Story Bridge …. 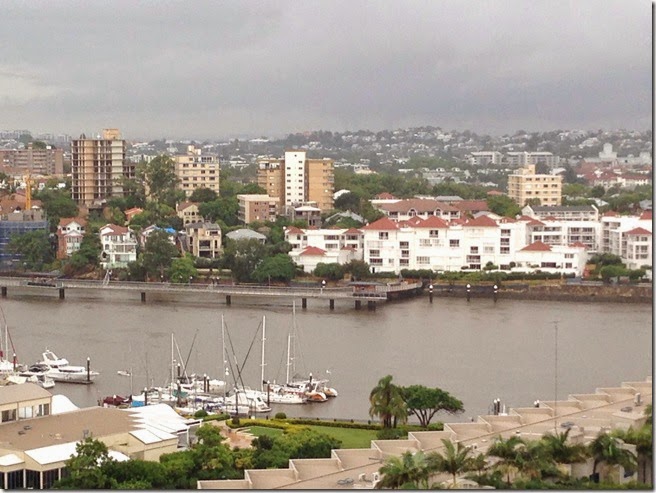 …. and east towards the river walkway which had been washed away in the 2011 floods. 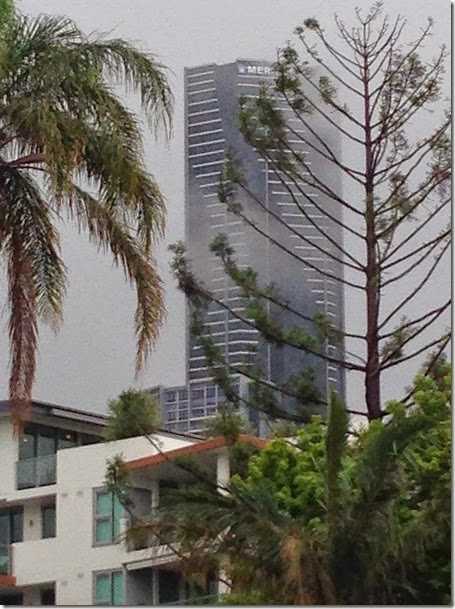 We went for a walk around the Docklands district.  The Meriton building in the city was still shrouded in cloud. 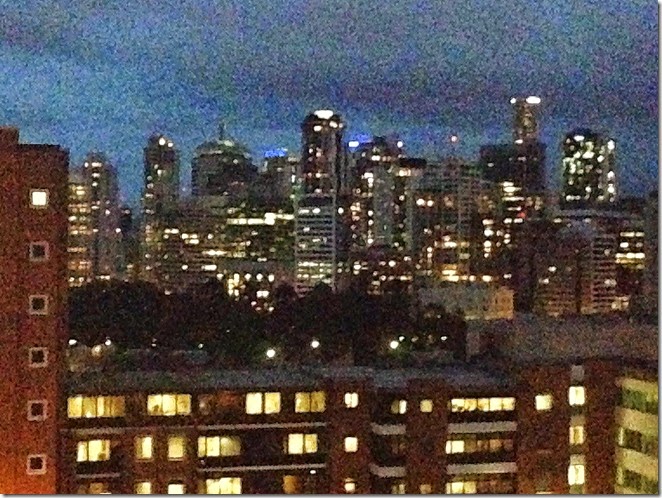 As evening fell, we were able to enjoy watching the city lights coming on, then we had a very pleasant dinner in the hotel restaurant. 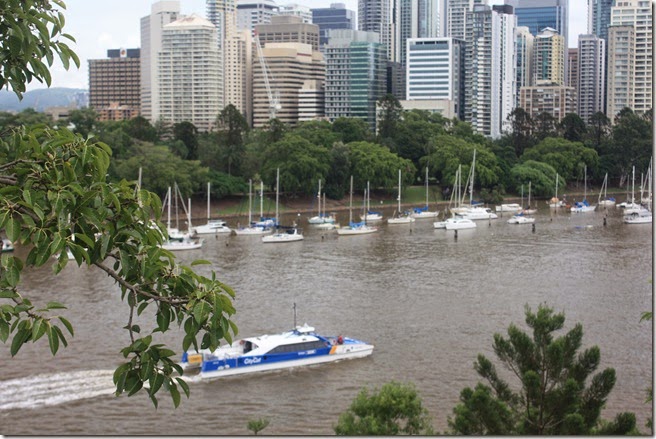 Next morning, we went for a walk along the top of the Kangaroo Point cliffs, looking over the city, Botanical Gardens, yacht moorings and CityCat ferry. 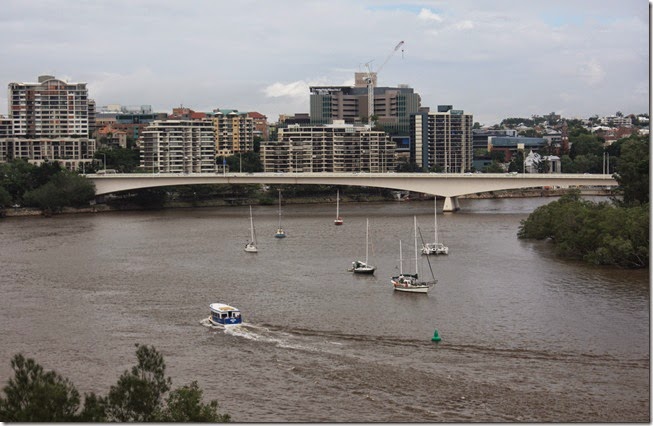 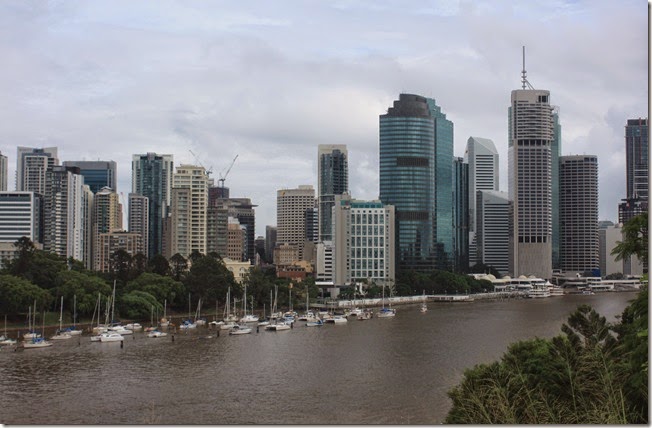 Back towards the city. 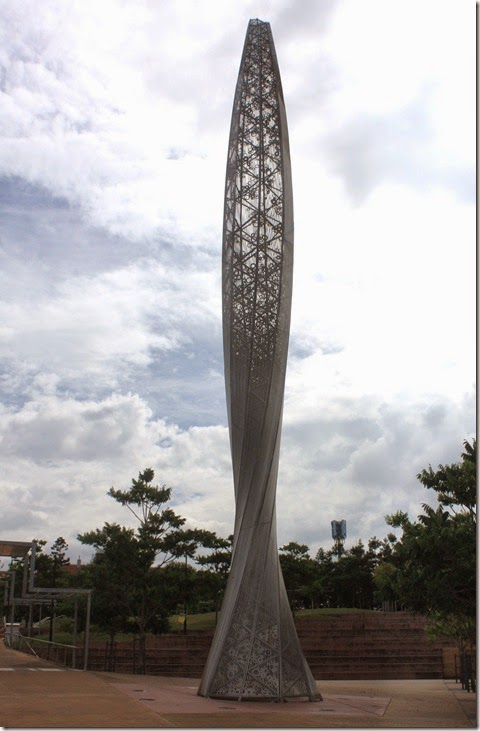 “Venus Rising is a 23 metre high stainless steel sculpture in Kangaroo Point Park.  It is … more concerned with weightlessness than mass, spiralling upwards with a delicate, elegant and almost ethereal energy.” 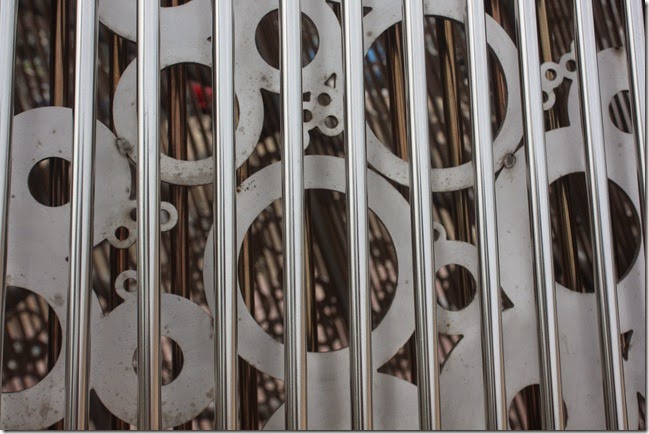 “Floating arrangements of circles within the design … 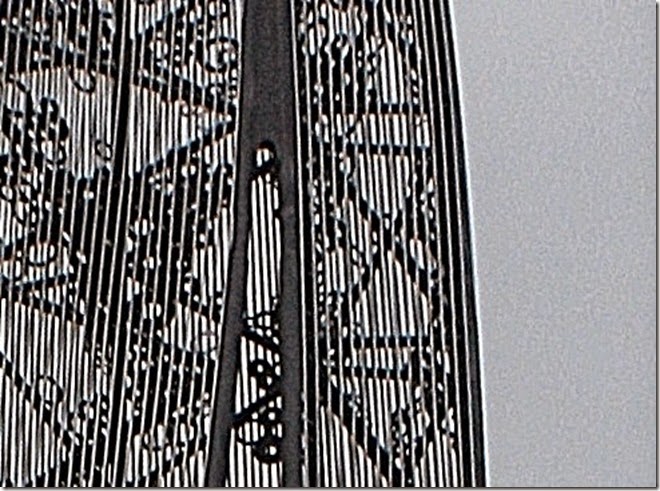 …create a sense of bubbles and movement rising up through water.” 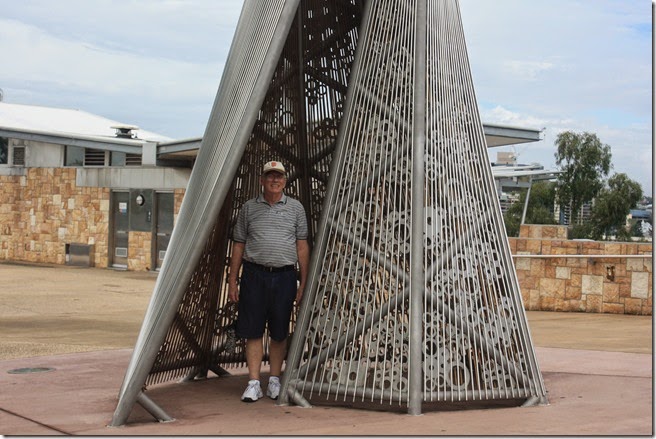 “When standing inside the sculpture … 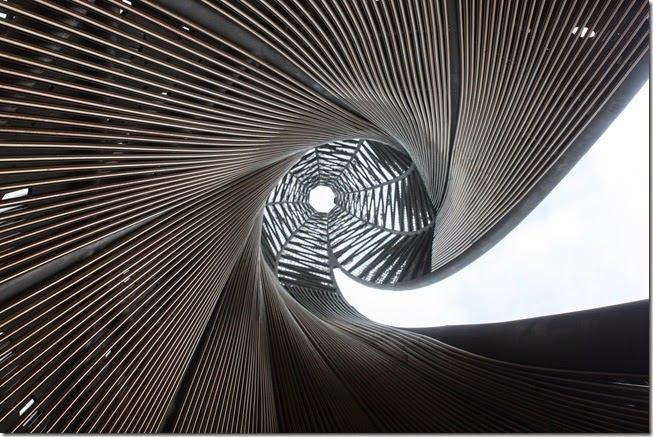 … viewers look up into an unusual spiral formation based on the intersection of central spines of the nautilus shell.” 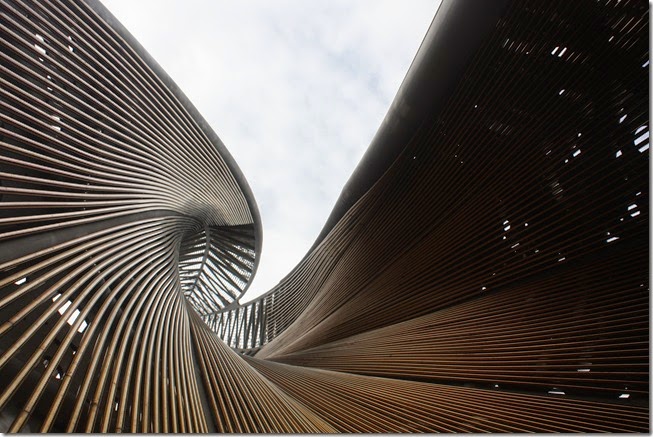 “The spiral refers to fundamental principles of geometry and symbolism about transition, growth and evolution itself.” 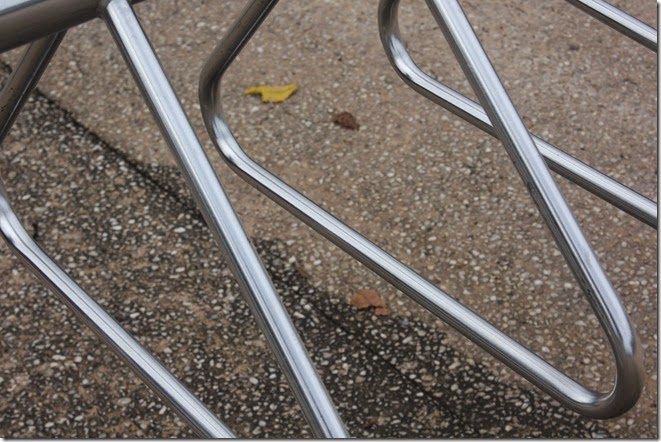 Woops, this is just part of a nearby bike rack. 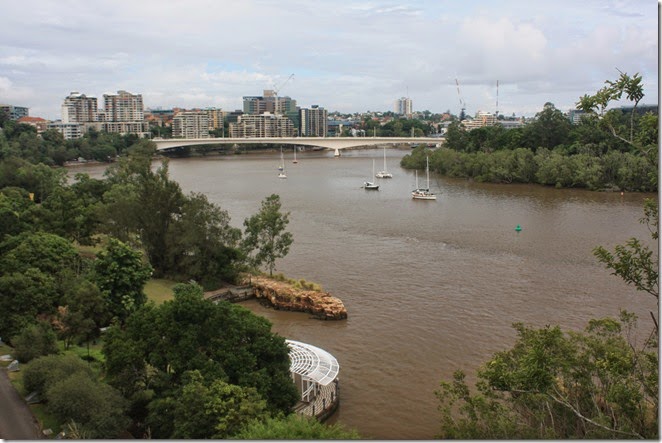 More of the Captain Cook Bridge. 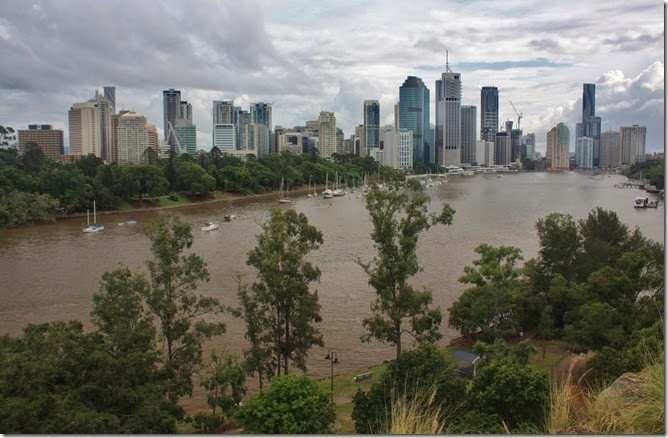 More of the river and the city. 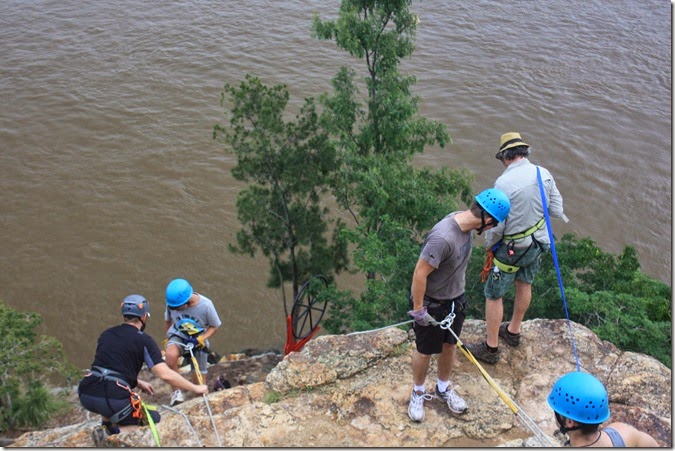 Abseilers on the cliff top reminded me that this is on my bucket list.  Thank you Pat for such a great birthday present! 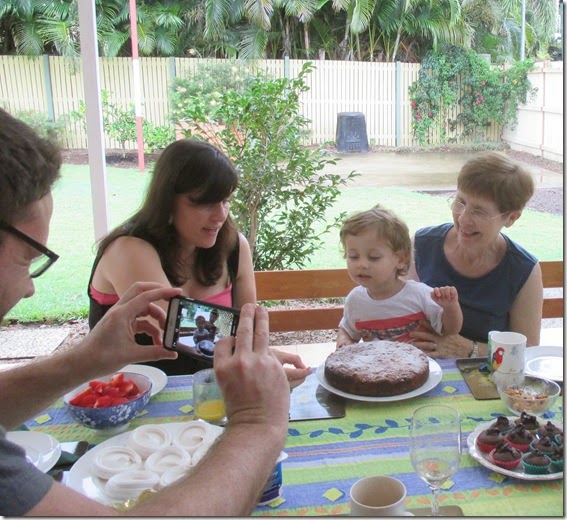 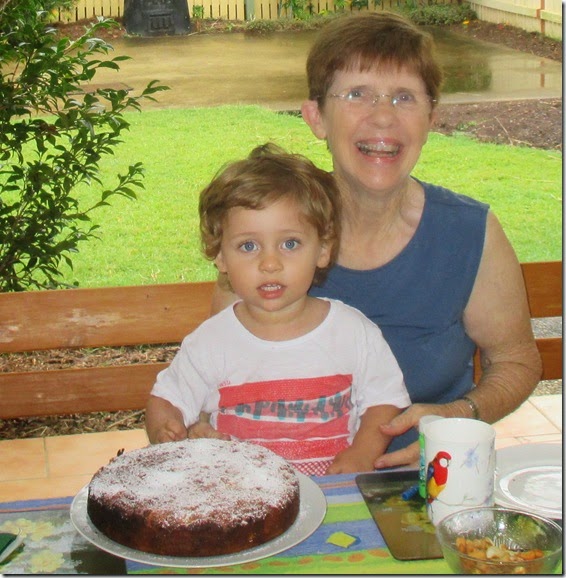 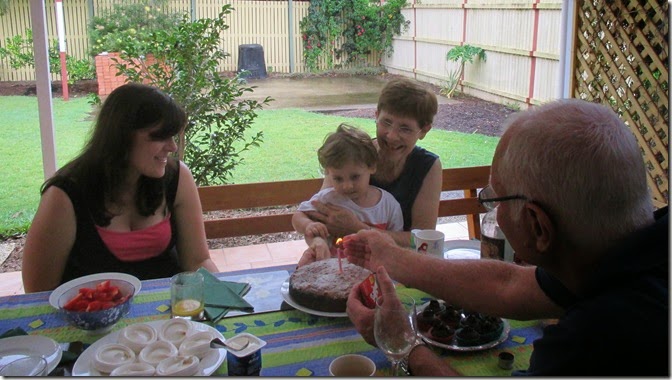 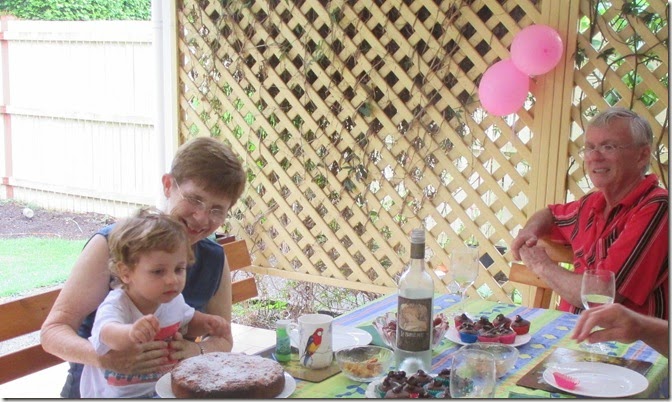 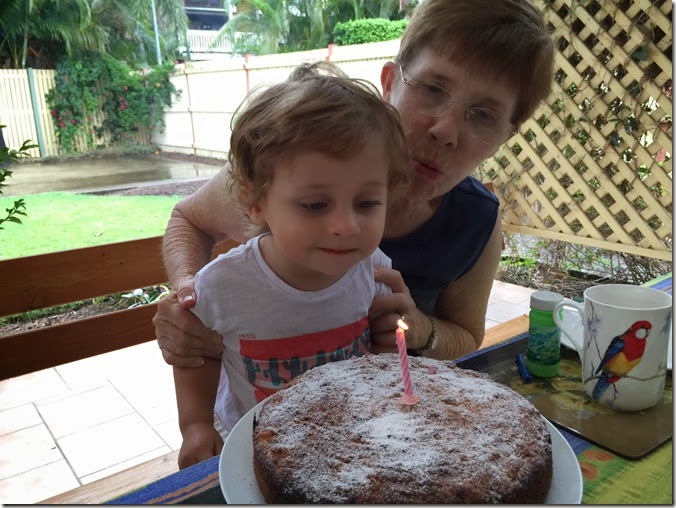 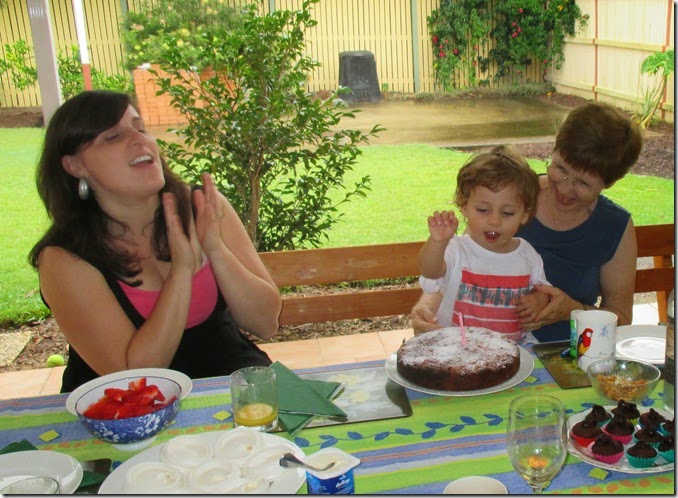 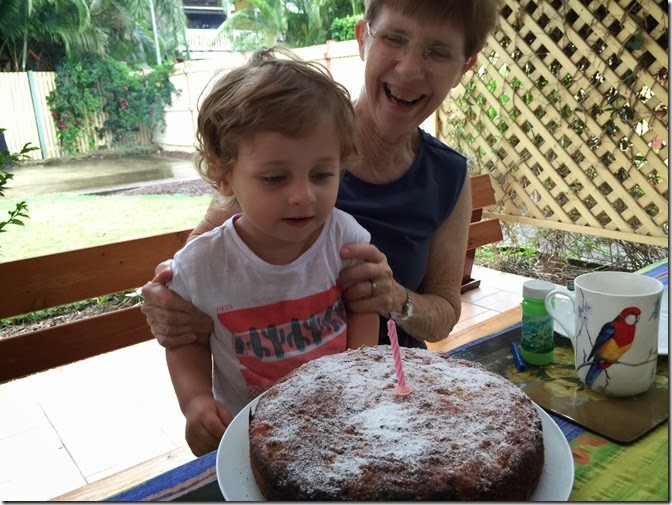 Later, I received some help with blowing out my birthday candle.  Thank you Helen for the cake.