A tale of two osprey (or maybe more).

Pat, his Mum and I were staying at Caloundra for a week.  One morning, on the boardwalk at Bulcock Beach, I heard a repeated, high-pitched whistle. 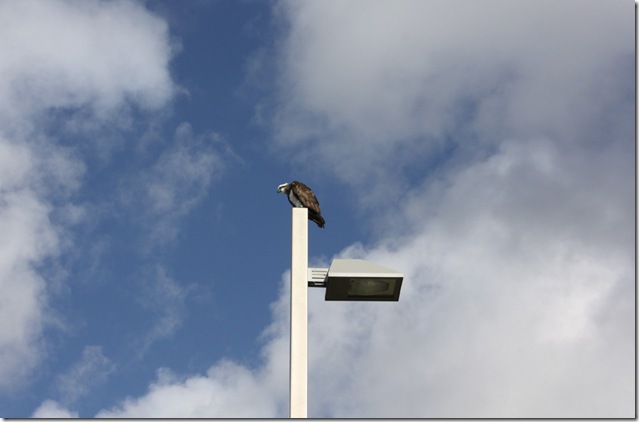 It was coming from this rather imposing-looking bird, which I imagined to be a sea hawk, sitting on a lamp post on the boardwalk.  I went back and looked up sea hawks, and found that it was indeed a sea hawk – also known as an osprey (Pandion haliaetus).  Somehow, the name “osprey” conjured up more romantic visions than plain old “sea hawk” so the next day (this time with the zoom lens) I came back looking for more. 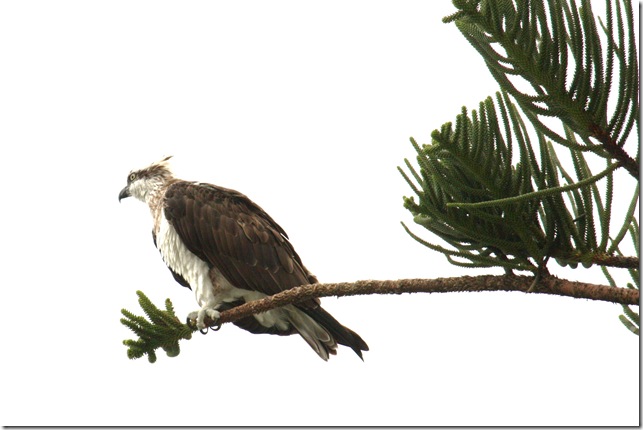 This time there were two of them, in a nearby Norfolk Island Pine.  The feathers on the head always look a bit ruffled and untidy, giving the bird the rather endearing appearance of an absent-minded professor, which is rather at odds with the fierce hooked beak and powerful talons.  I had learnt that owls and ospreys are the only raptors whose outer toe is reversible, allowing them to grasp their prey with two toes in front and two behind (particularly helpful when grabbing slippery fish). 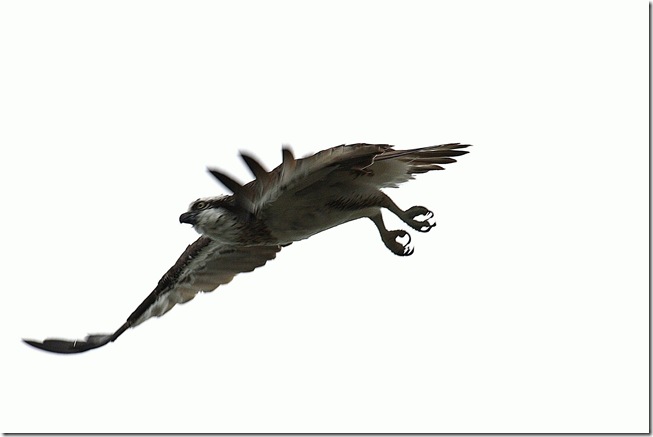 This one obligingly took off, so we could see it in flight.  Although this picture is a bit blurry, you can see the lethal talons – although I can’t tell how many toes are pointing forwards and how many are pointing backwards.  In this picture, you can also partially see that the wings end with four long, finger-like feathers, and a shorter fifth. 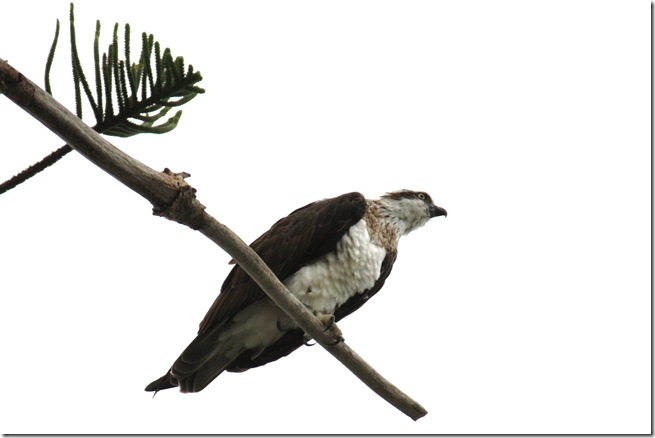 I think this is the other one.  Apparently the sexes are fairly hard to tell apart.  The male has a slimmer body and narrower wings, and some slight differentiations in markings, but these two birds didn’t line up side by side for us to compare them with each other. 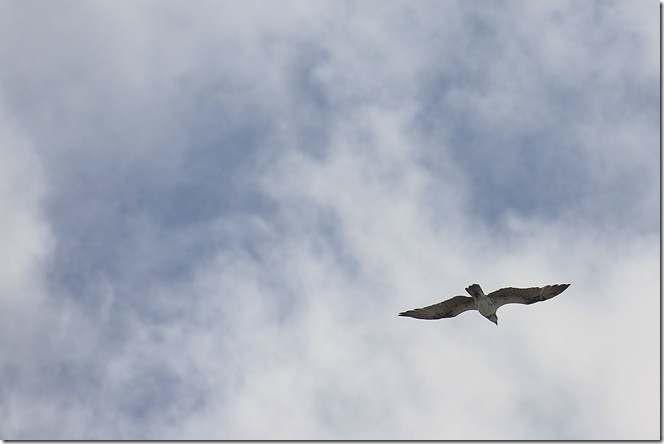 A couple of days later, we were at Moffat Beach, when we saw one flying up and down over the rock pools along the beach at low tide.  The wingspan of an osprey can vary between 127–180 centimetres, but I think the Caloundra osprey were at the smaller end of that scale.  When they are fishing, osprey hover 10–40 metres  above the sea, then plunge feet first into the water and seize their unsuspecting prey with their very effective talons. 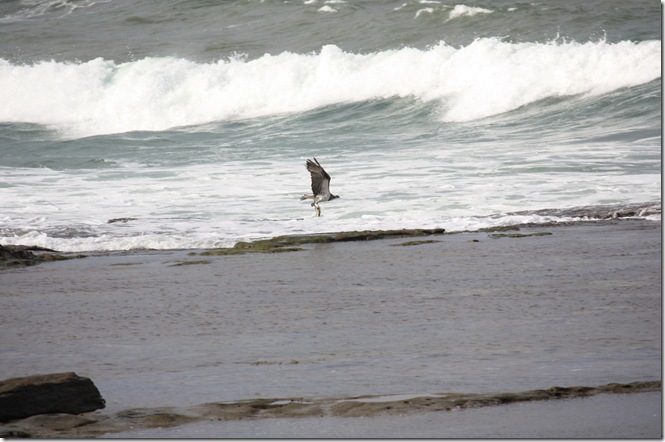 Now this is the exciting bit - I actually missed it, as I was photographing something else at the time.  Pat and Grandma were watching this osprey hovering when they saw it drop down to the sea, snatch a fish out of one of the shallow rock pools with its talons and fly along the beach with it.

I saw it as it began to fly towards me – no time for any fast shutter-speed settings, but luckily the camera was on good old auto, so I caught a few shots of this special event, even if they weren’t as clear as I would have liked. 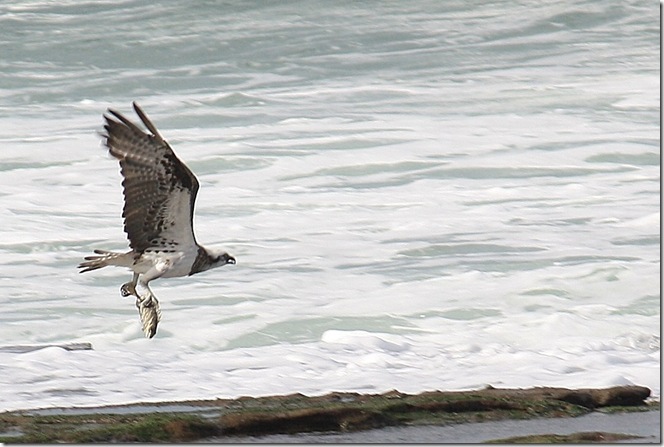 Here’s a close-up from that shot. 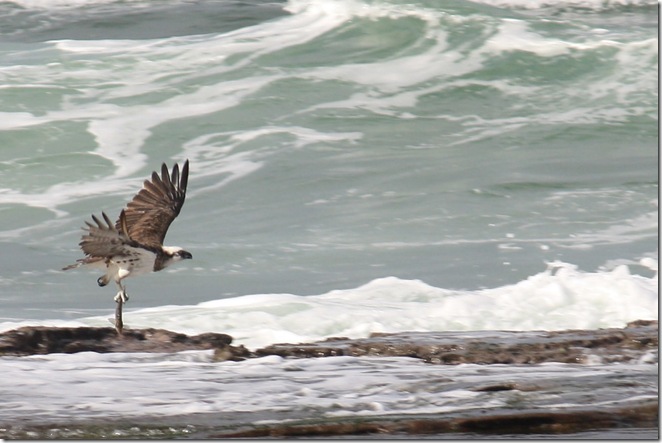 You can see quite clearly that the osprey is effortlessly carrying the fish in just its right talon – I’m guessing with two toes forward and two behind.  This shot also clearly shows the five separate feathers at the end of each wing. 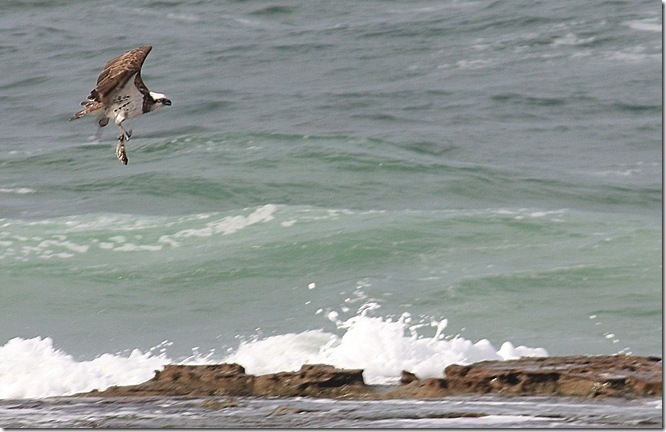 The osprey continues carrying the fish in its right talon. 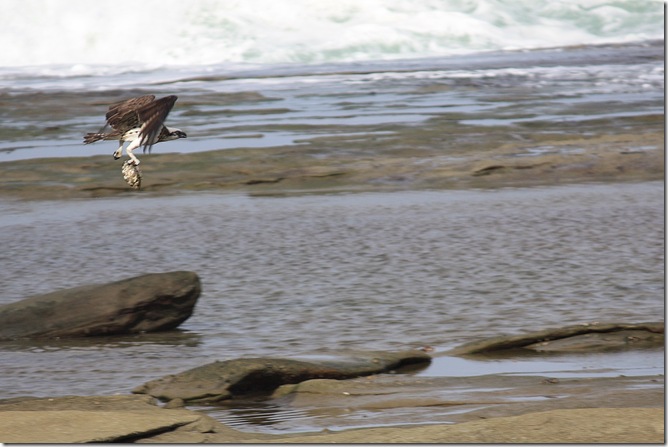 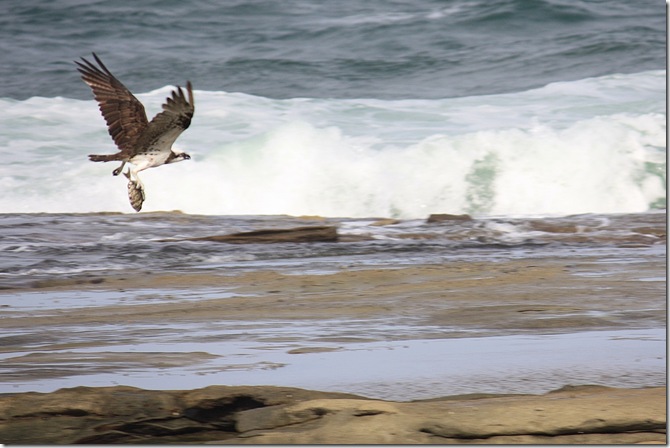 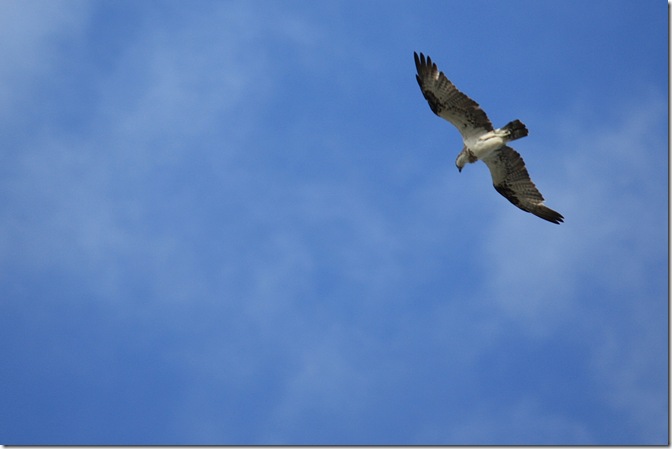 When the osprey came back a few minutes later, there was no fish to be seen. 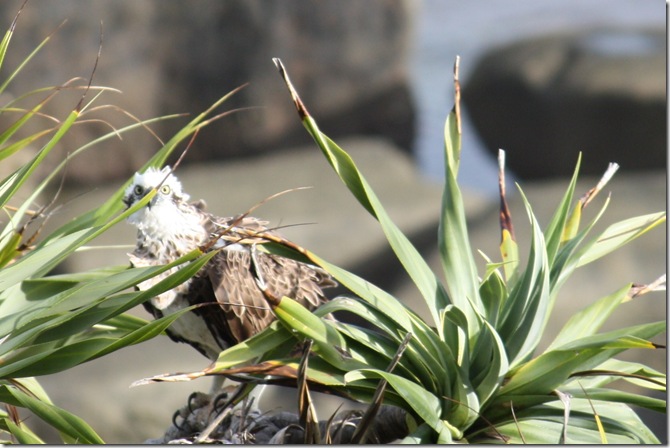 Around the corner, on the cliff between Moffat Beach and King’s beach, we found an osprey in a pandanus tree.  We weren’t sure if it was the same one we had seen fishing.  You can see both of its beautiful golden eyes.  My friend Celia told me that there are some permanent osprey nests here, which are used from year to year.  Celia has seen some parent birds teaching a chick to fly on these cliffs. 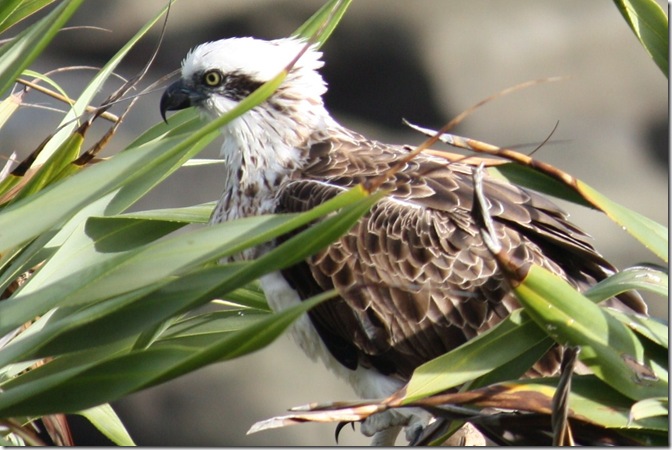 This is my favourite shot – you can see how sharp the beak and the talons are.  (Pity about the scrawny pandanus tree blocking the view.) 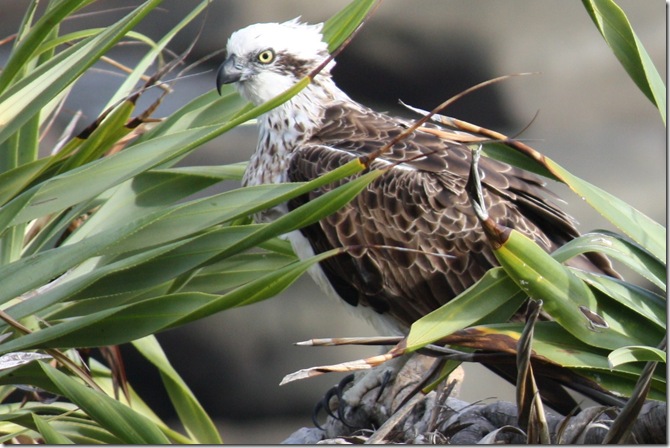 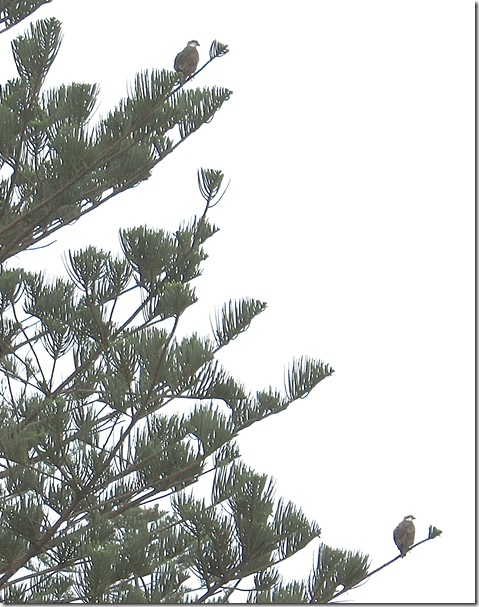 The day we left, I took a quick walk down to the boardwalk at Bulcock Beach, where I had seen the first osprey, and sure enough, there was a pair of them in a Norfolk Island Pine (but no zoom lens this time).

Goodbye osprey, hope you’re still there next time we come to Caloundra.