A further 18 km north of Wonga Beach, and 70 km north of Cairns, the little village of Daintree lies on the Daintree River. On the spur of the moment, we decided to take a crocodile-viewing river cruise. Our boat was a small, very quiet, solar-powered electric one. We were the only passengers, so had the knowledgable local guide to ourselves. 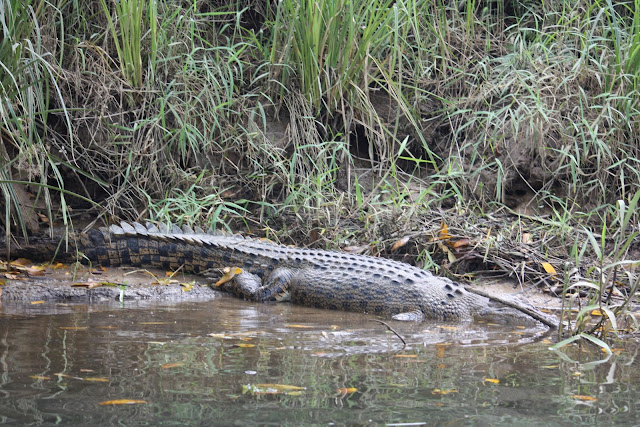 I couldn’t believe it when we went straight across the river from where we boarded, and there was a three metre crocodile! 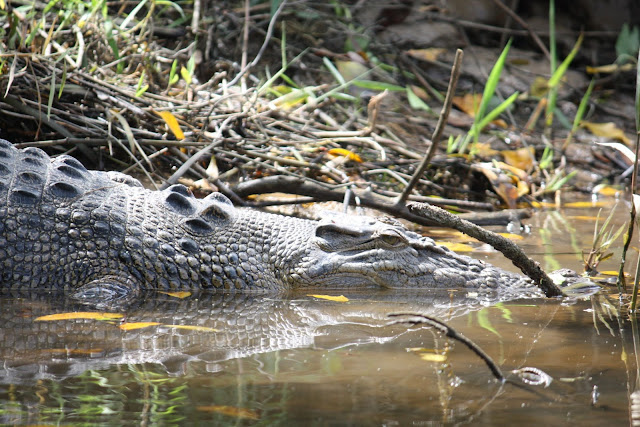 He wasn’t moving, but he had his eye on us. 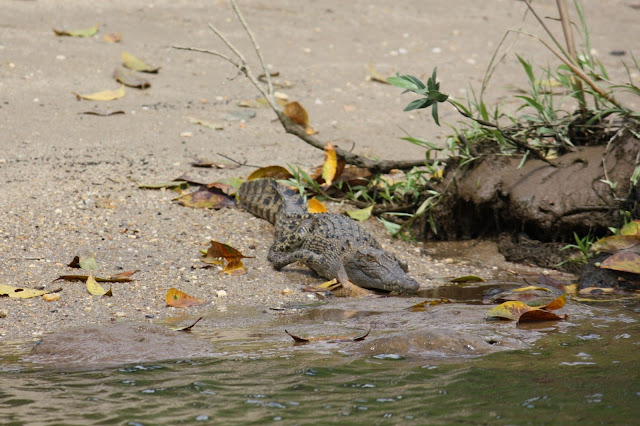 Further downstream was a one metre baby. 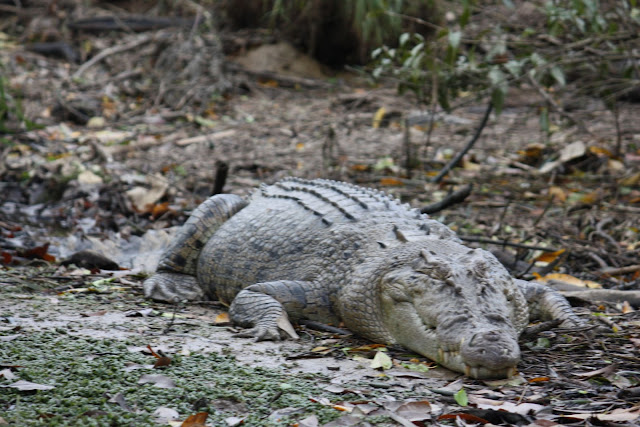 This fellow was 3.5 metres long, and very well fed. 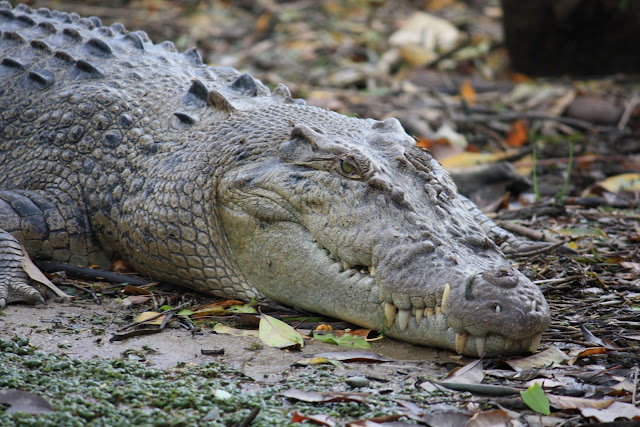 I didn’t like his teeth, and was quite relieved when we slipped silently away without incident. 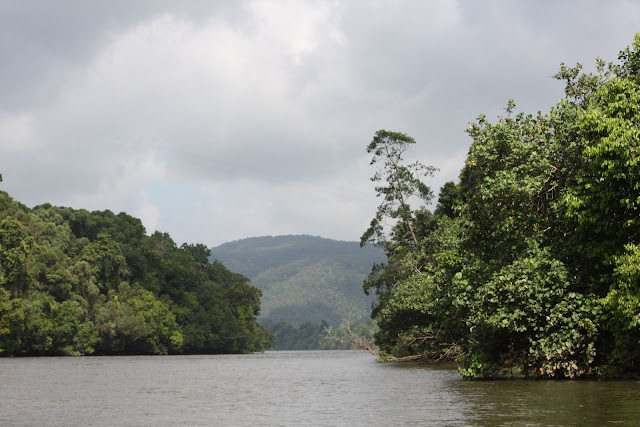 The river was breathtakingly beautiful. 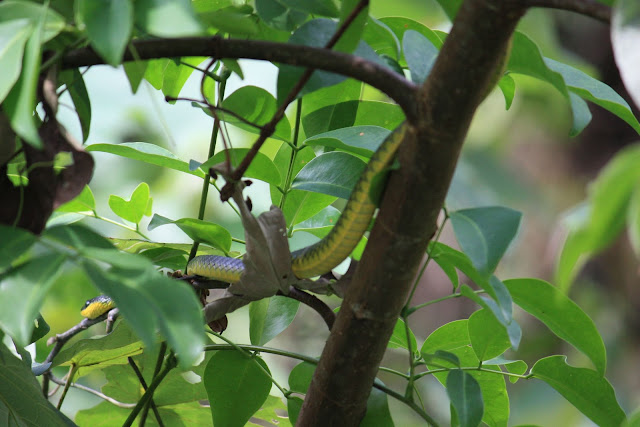 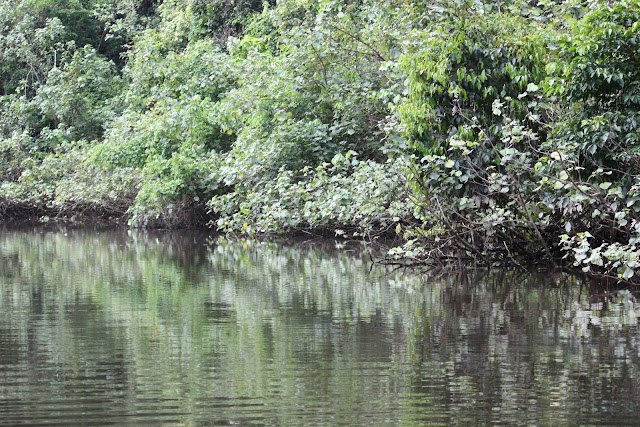 I will remember this trip for the rest of my life.

Just 18 km north of Mossman lies Wonga Beach, a classic deserted tropical beach with white sand, gentle waves, coconut palms leaning towards the sea and coconuts lying ungathered all over the beach.  We couldn’t believe we had this idyllic tropical paradise to ourselves. 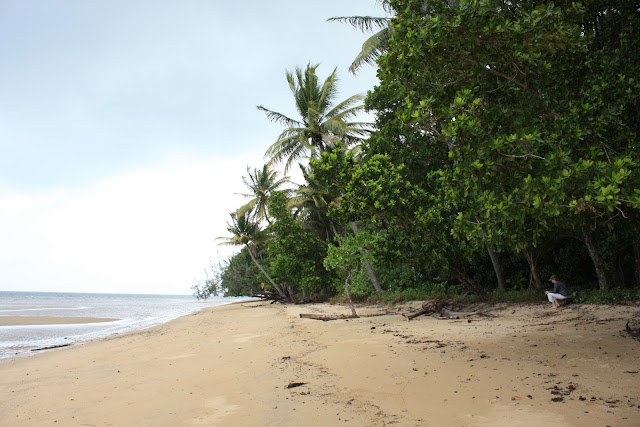 Carol (and no-one else) on Wonga Beach. 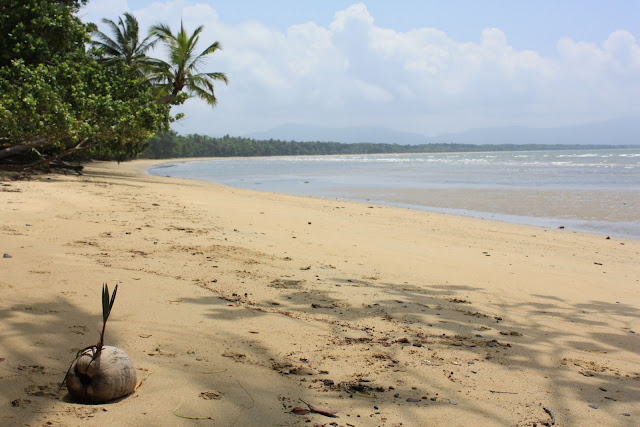 Sprouting coconut on Wonga Beach.  We took a coconut with us and I spent half a day getting in to it - but I did succeed in the end.
Posted by Jan at 3:38 PM 1 comment:

We spent the night in Port Douglas in our Wicked Van parked in Carol’s friend’s driveway, then the next morning drove to Mossman. 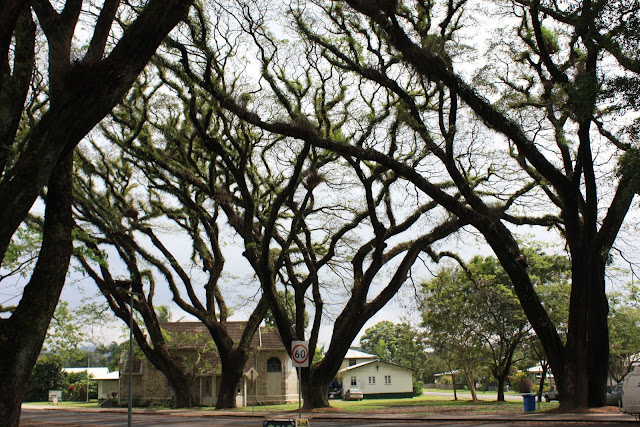 Carol remembered this avenue of rain trees from a visit she made there when she was eight. 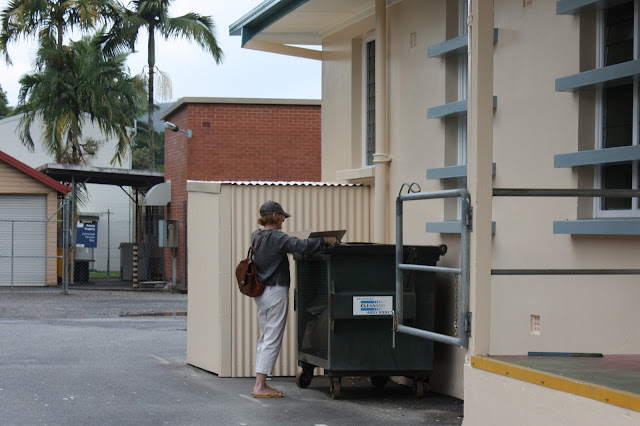 At a second hand shop in Mossman, Carol found a picture of magnolias that caught her fancy. This involved removing it from its frame, wrapping it (roughly) in newspaper, and being directed to obtain some cardboard from the Mossman Post Office rubbish skip to post it back to Brisbane. 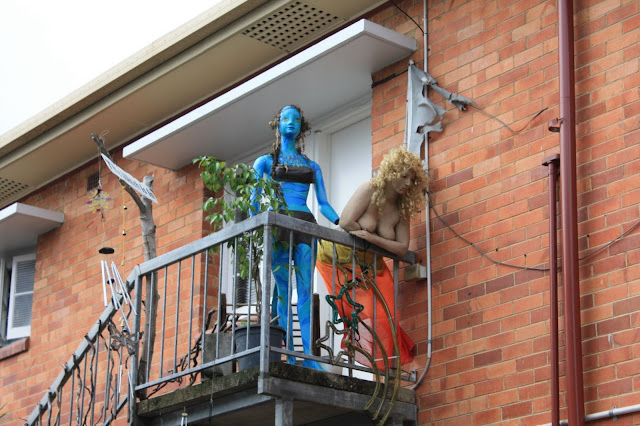 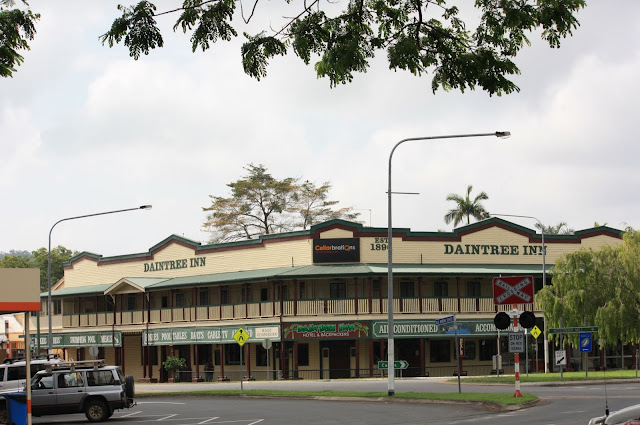 Splendid Daintree Inn in Mossman.
Posted by Jan at 3:32 PM No comments: 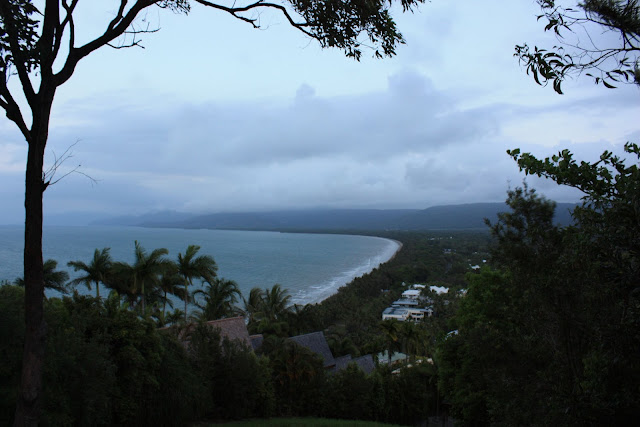 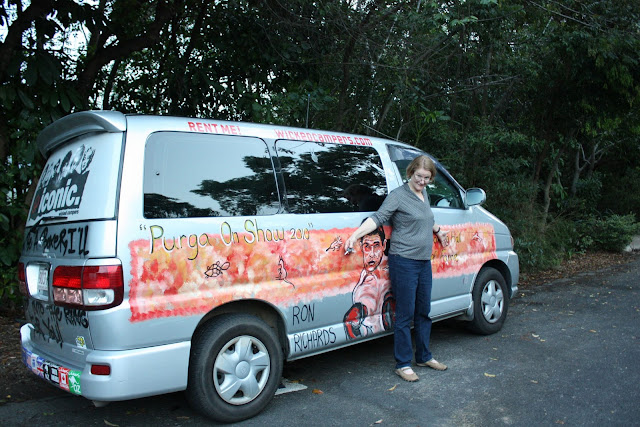 Our Wicked Van at Port Douglas.  It was a great conversation starter wherever we went. 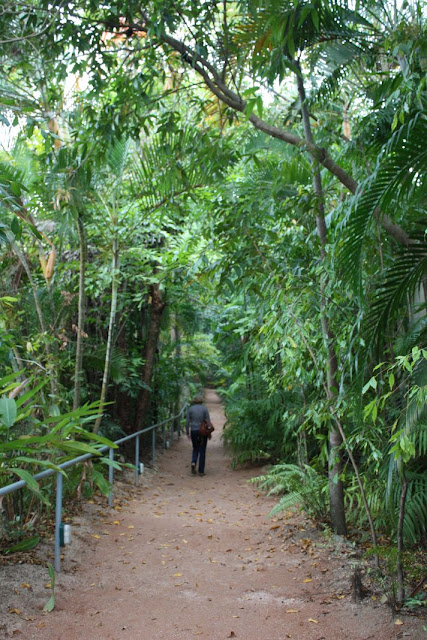 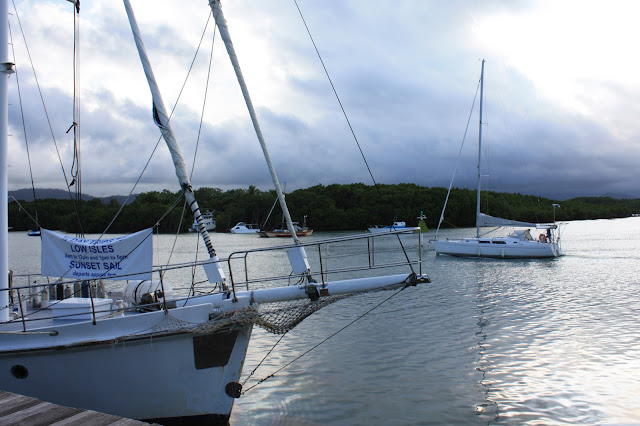 ﻿
View from the reataurant over the water at Port Douglas where we had dinner.  There were lots of people there waiting to see the gropers being fed.  Unfortunately, on the day we were there, the gropers didn't come.....
Posted by Jan at 4:19 PM No comments:

Carol is presenting at a Permaculture Convergence (!) in Kuranda, and invited me along for the ride.  Wicked Vans were recommended as offering a good deal to Convergence attendees, so we dcided to hire one for a week and make a holiday of the trip.

We took the airport shuttle bus into Cairns, which dropped everyone off where they wanted to go, so we had quite an enjoyable tour of Cairns before we were dropped at Wicked Vans.

The characteristic of Wicked Vans is that they have hand painted murals on the outside of them, and also grafitti slogans, so of them quite rude.  Ours has a painting of the indigenous boxer Ron Richards, who was commemorated at Purga near Ipswich earlier this year, so its slogans are about boxing, which isn't too bad.  Still, people are generally surprised to see two mature ladies hopping out of it everywhere, and its a great conversation starter.

Firstly, we drove to Carol's permaculture friend and co-author of one of her books, Janet, who lives in the hills a bit west of Cairns, in a spot that was a bit hard to find.  Janet lives in a Balinese-inspired house with a magical tropical garden with brilliant blue Ulysses and vibrant Cairns Birdwing butterflies fluttering about everywhere.  They were extremely difficult to photograph, especially as it was raining on and off, so this was the best I could do: 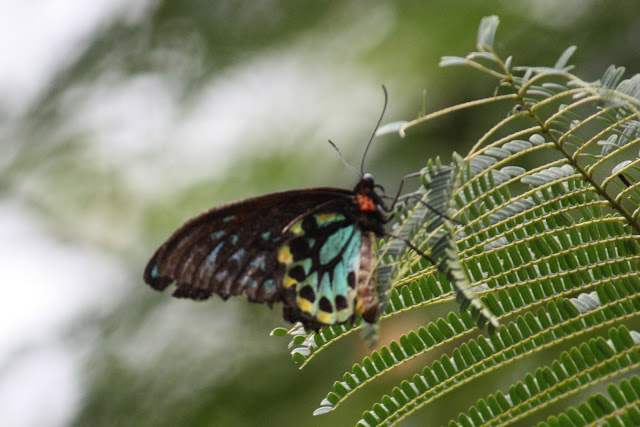 The Cairns Birdwing butterfly is Australia's largest, with a wingspan of up to 16 cm.  The other side of the lower wing is a brilliant emerald green, but I could only catch them when they had landed. 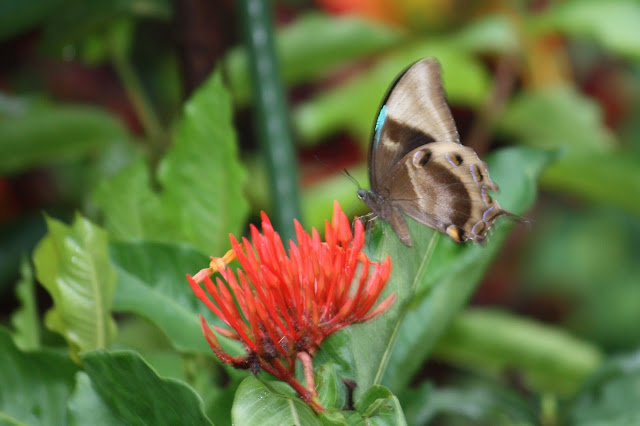 The other side of the Ulysses butterfly's wings is a startling iridescent blue (you can just see a glimpse of it here) but once again they were too quick for me to catch in flight.
Then we drove up to Pt Douglas, to visit another of Carol's friends.  The road north of  Cairns is very pretty, with mountains on one side, and the sea on the other.  Pt Douglas is a resort village and very relaxed.
Posted by Jan at 8:36 PM No comments: