The Adventures of St Paul in Damascus: Chapter 4

In Damascus there was a disciple named Ananias. The Lord called to him in a vision,

The Lord told him, "Go to the house of Judas on Straight Street and ask for a man from Tarsus named Saul, for he is praying.  In a vision he has seen a man named Ananias come and place his hands on him to restore his sight."

"Lord," Ananias answered, "I have heard many reports about this man and all the harm he has done to your saints in Jerusalem.  And he has come here with authority from the chief priests to arrest all who call on your name."

But the Lord said to Ananias, "Go! This man is my chosen instrument to carry my name before the Gentiles and their kings and before the people of Israel.  I will show him how much he must suffer for my name."
(Acts 9:10-16) 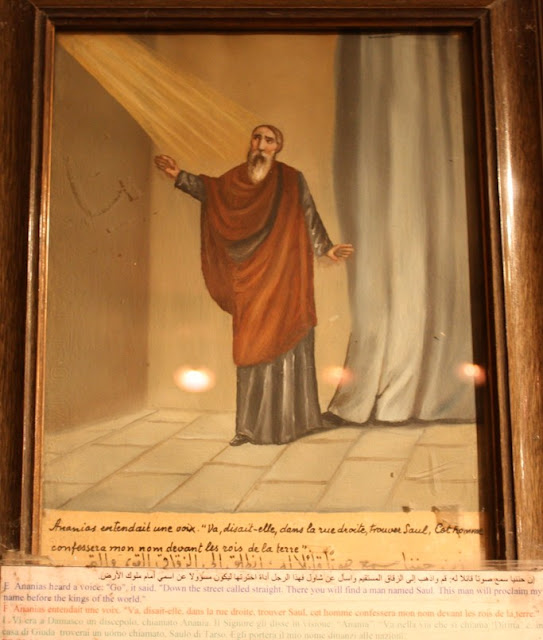 The vision of St Ananias
Here is poor St Ananias having his vision, from the hard-to-photograph series in the house of St Ananias.
Like many other people who have had visions from God (e.g. Jeremiah and Jonah) Ananias is understandably not happy with what he is asked to do, and tries to argue with God, to no avail.

So off he sets to Straight Street. 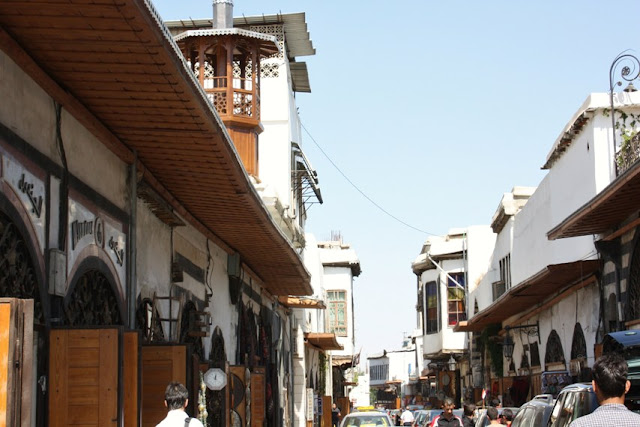 The house of Judas in Straight Street
I know I have used this picture in Chapter 3, but I was so pleased at identifying the spot, I just had to use it again.  This is where Paul was led by the hand after his tumble, and spent three days being blind and not eating or drinking.  Can you imagine Ananias, with some trepidation, knocking on the door? 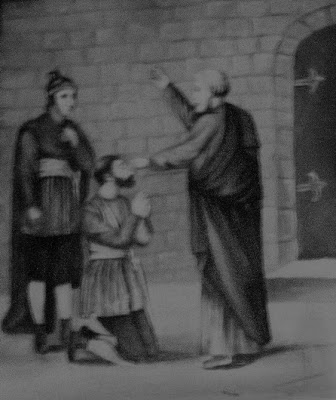 St Ananias heals St Paul of his blindness
Then Ananias went to the house and entered it. Placing his hands on Saul, he said, "Brother Saul, the Lord—Jesus, who appeared to you on the road as you were coming here—has sent me so that you may see again and be filled with the Holy Spirit."  Immediately, something like scales fell from Saul's eyes, and he could see again.  (Acts 9:17-18a)
I know this picture - again from the house of St Ananias - is not a good one, but it's the best I could do with it.  Just think of it as Paul coming out of his blind spell. 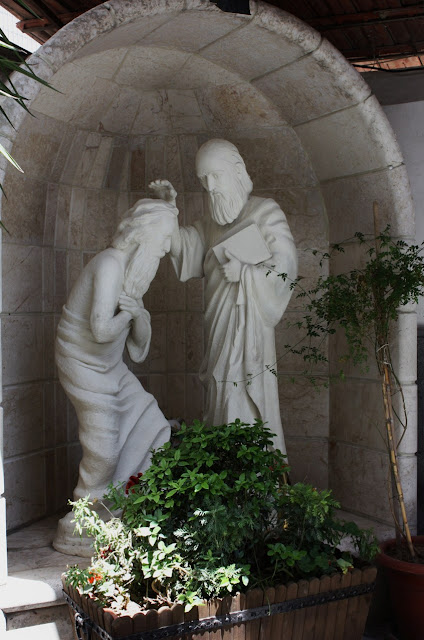 St Ananias baptises St Paul
He got up and was baptized, and after taking some food, he regained his strength. (Acts 9:18a-19.)


Here is a statue, outside the house of St Ananias, of St Paul being baptised by St Ananias.

Eastern tradition includes St Ananias as one of the 72 disciples sent out by Jesus (Luke 10:1). Following the stoning to death of St Stephen in Jerusalem, supervised by Paul, Ananias prudently returned to his home city of Damascus, where he later became the city's first bishop.  According to this tradition, he was arrested by the Roman governor Licinius for being the head of the local Christians, and stoned to death outside the walls of Damascus.

Material and written evidence, as well as oral tradition, suggest that the site of the present House of St Ananias is in fact the actual site of where St Ananias lived, and the early Christians gathered, although numerous different buildings have occupied the site during the intervening 2,000 years.

In 1820, the Franciscan Holy Land Custody reclaimed the site and rebuilt the house, adapting it into a chapel.  Further chages were made in 1893 and 1973, giving the underground chapel its present form.

To reach the House of St Ananias, enter Old Damascus by the eastern gate of Bab Sharqi, and take the first turn to the right, Hanania (a version of Ananias) Street, and proceed until the street takes a dog-leg turn to the left, and there you are.  The underground chapel is reached by a staircase of 23 steps of basaltic rock, as the present street level is four metres above what it was in St Paul's time. 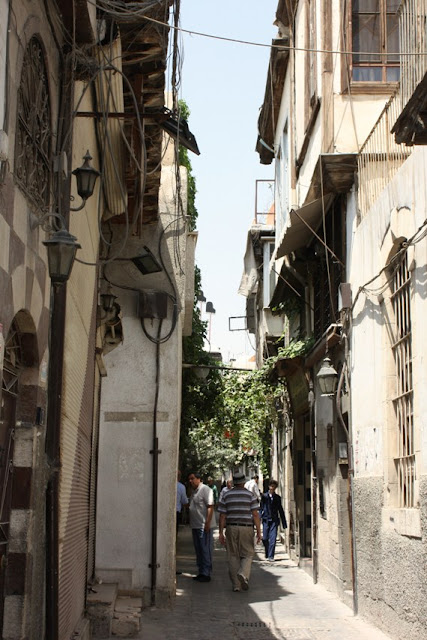 Hanania Street
Pat strides along towards our objective, map in hand. 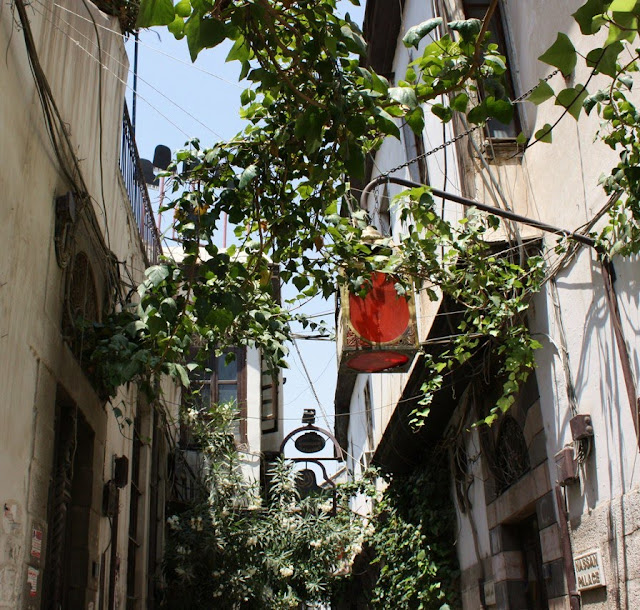 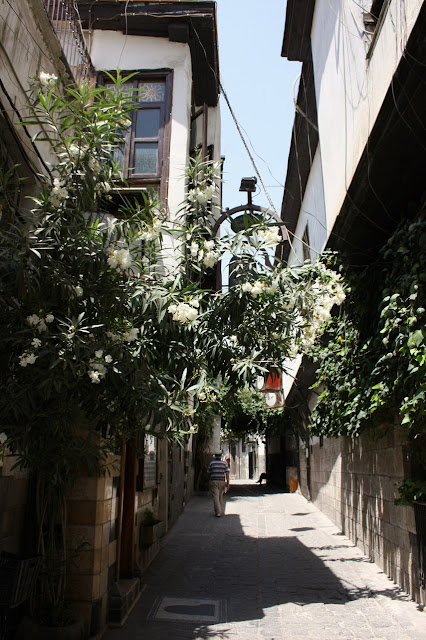 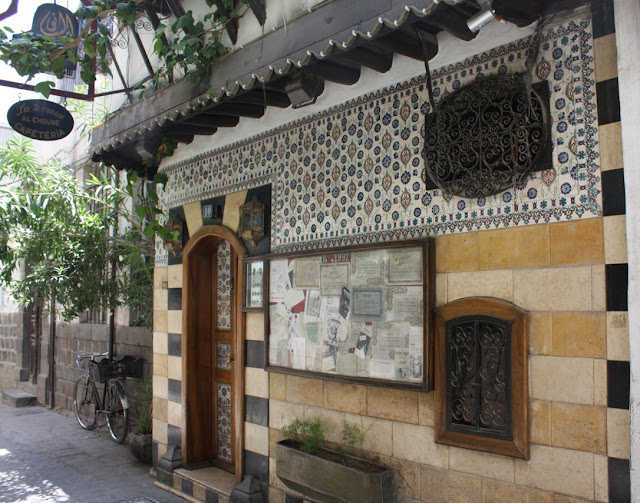 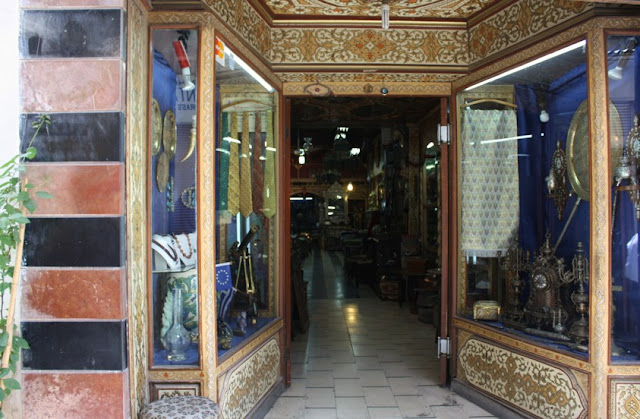 Hanania Street
Enticing shop along the way.  Did we stop? No. 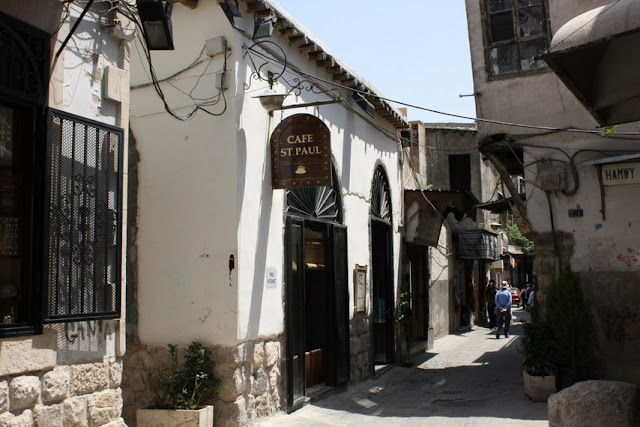 Cafe St Paul, Hanania Street (with free internet)
We must be getting close.  Pat's out of sight. 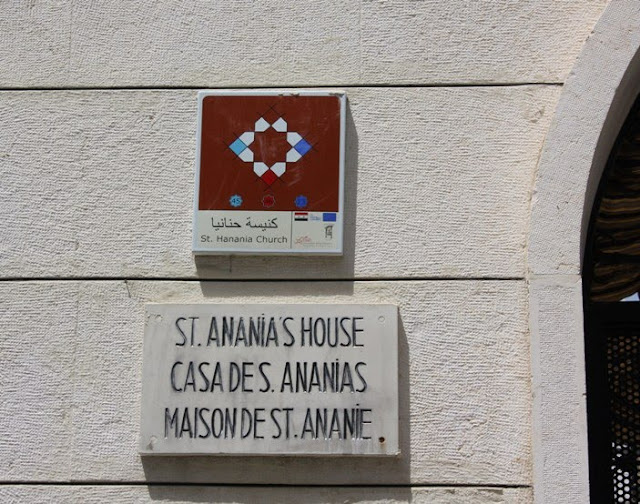 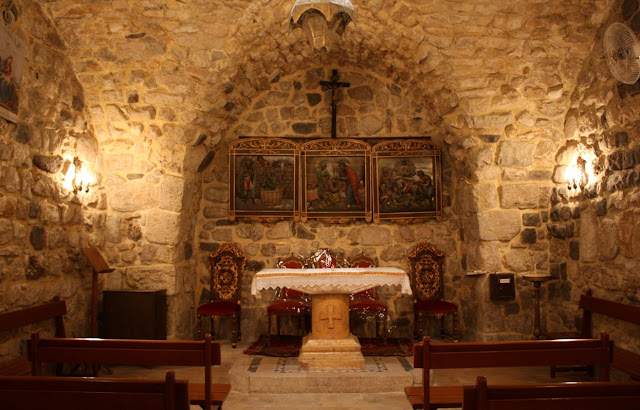 The House of St Ananias (finally!)
Down the 23 steps of basaltic rock we went, to find this beautiful underground chapel, lovingly maintained by the Franciscan Holy Land Custody.  Above the altar are pictures of Paul in his basket, Paul being healed or baptised (it's hard to tell which) by Ananias, and Paul having his vision.

The second room contained a series of pictures (several of which you've seen) depicting the adventures of Paul.  A truly beautiful place. 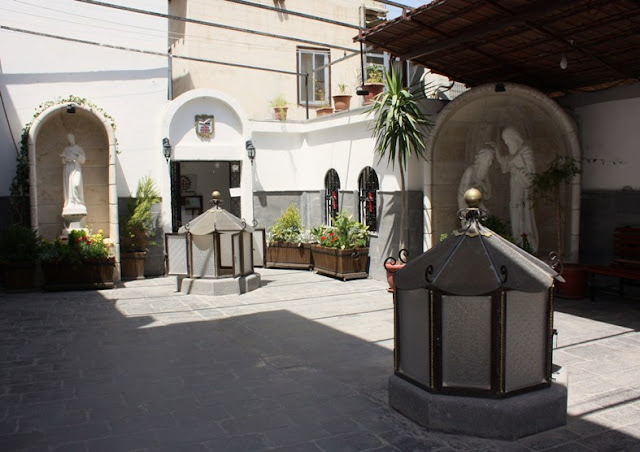 The House of St Ananias (street level)
The two circular windows provide the only natural light and fresh air to the underground vault.  On the left is a statue of St Francis, as the house is maintained by the Franciscan Holy Land Custody, while on the right is the statue of St Ananias baptising Paul, as shown above. 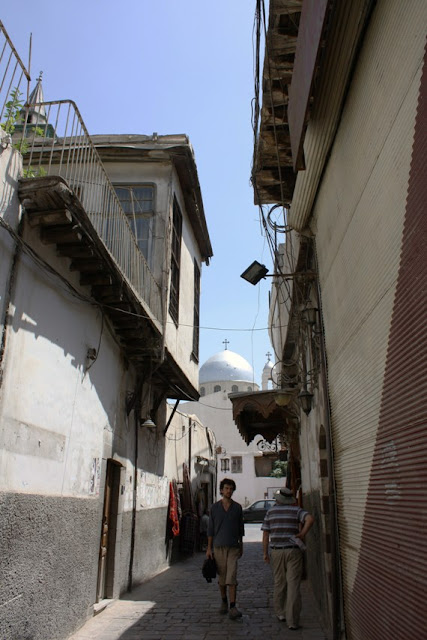